Nomadic – feet on the ground, heart in the sky 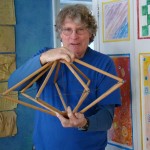 The Sky Yurt concept. How could I put a tipi-like structure up in the air? I began to make some models and do some rough drawings. I was influenced by Bucky Fuller who said that structures should have an integrity that didn’t depend on gravity. I think he called that “tensegrity”. If the house I live in now, a Greek Revival built in the 1860′s, […] 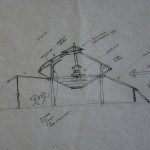 Working on the Ground – Living in the Sky.  I started making very rough sketches years ago. I wanted an open, circular, covered workspace on ground-level. The living space needed to be elevated, so you could almost walk underneath it, or at least see through it. I flattened out the tall tipi shape to make it more like a diamond, like in my […] 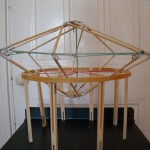 A light and strong structure. The structure needed to be strong but not heavy. To hold the Sky Yurt up in the air, and to attach the awning for the workspace I was going to need a strong core structure. But the Sky Yurt itself could be made of much lighter structural materials. It only had to hold itself together, like a pop-up camping tent. […]