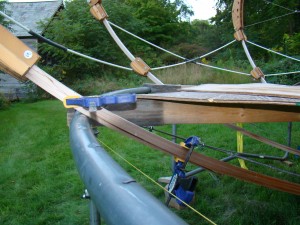 Damn. What was I thinking. I was planning to put the cover on today. Finally got it finished. But the wind was blowing too hard, so I moved on to some mechanical stuff. Building some braces for the frame. Deciding on some modifications for the lower cover panels. I have been thinking a lot about how I was going to get the telescoping legs inserted into the trampoline frame.Once the legs are in, the structure can be jacked up incrementally, raised to a 10 foot height and leveled, one leg at a time.

The telescoping legs are about 6 feet high in the down position. So my plan was to dismantle the Sky Yurt structure, including the floor, put the legs in. Build the Sky Yurt back, and then incrementally raise the structure on its legs. Sensible, safe, practical. But then today I thought, what the hell, I’ll give it a shot. Maybe I can get those legs inserted without having to take the Sky Yurt down. Of course, I was planning to have some help. At least another pair of hands But maybe I just might be able to do it myself.

Got one leg jacked up OK. But it got pretty wobbly. Should have just put it down again, until I had some help. But as I left the jack and began to shore up one of the other legs, the whole structure cam down with a crash. One corner dropped 3-4 feet. It looked OK, but on further examination, I realized I had cracked three of the lower laminated cedar beams, one clean through. I don’t like to call myself stupid, but I was sure exercising poor judgement. One thing I am good at is disaster control (I think you might be able to guess why). Got busy and took all of the hubs and connecting rods off the upper beams, to take weight off the lower beams. I’ll break the whole structure down. I plan to repair the cracked beams with epoxy and fiberglass tape. I still hope to exhibit at the Makers Faire, but probably without the cover or the outer skirt. But I do plan to have the frame 10 feet up in the air.