How could I put a tipi-like structure up in the air? 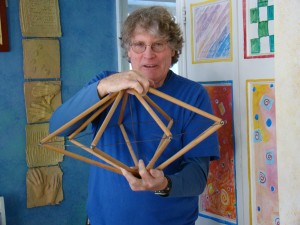 I began to make some models and do some rough drawings. I was influenced by Bucky Fuller who said that structures should have an integrity that didn’t depend on gravity. I think he called that “tensegrity”. If the house I live in now, a Greek Revival built in the 1860’s, were pushed off into space, the components would begin to come apart. A tensegrity structure would hold together, like a bicycle wheel. It wouldn’t depend on the forces of gravity.

Long ago I built an eight-sided model out of dowels, eye screws and wire. I was impressed with how stiff the structure was and how strong it it felt. I carried that model through all my life changes and moves. I hung it up in a prominent place in my office or living space so I wouldn’t forget the concept. 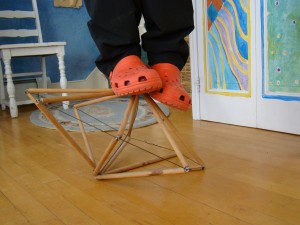 The strength in the structure comes from the compression ring around the outside diameter – much like a yurt. I added the tension wire in the middle, but was sure that I wanted a design that would be completely open inside. I would need to create another way of tensioning the yurt.

Today, I went ahead and strength-tested the structure to see if it was really as strong as i imagined. Amazingly, it held my weight (200 lbs.). In the current prototype of the Sky Yurt the downward tension comes from fabric cover.